Full of joy of playing, three actors play poker with cheeky characters, fine tones, cheeky comedy and touching musical interludes for the favour of the audience.

Theatre sport is theatre for the moment.
At the Härdöpfeler 3 players improvise in a competition. They challenge each other according to the ideas and themes of the audience. After each scene the audience decides who has convinced them the most. But the points are not only distributed by good play and sympathy, but also by correctly predicting the ranking.

We are also happy to take themes from your event or company as a starting point for our scenes. In this way, you will relive the most impressive events of the past year and look at situations from everyday working life from a completely new perspective. For the first time, we put their visions of the future into practice or give a song to an important person as a farewell gift!

The stories emerge before the eyes of the audience, each evening is new, unrepeatable and unique.
Who can best take the pulse of the audience with charm and mischief? A fast-paced theater poker, where the hall crackles and the magic of the moment unfolds.

The TAP - Theater on the pulse

For over 17 years TAP has been inspiring a large audience. The people of Berne unfold their joy of playing in their proven poker format "Härdöpfeler", regular theatre sports matches with national or international guests or their children - improv show "SchnuderGäng".
The new Bernese improv crime thriller "Tap in the Dark" caused a sensation last winter and cast a spell over even those who don't like crime thrillers.
The ensemble consists of Kathrin Fischer Niklaus, Thomas Laube, Roland Peter, Manuel Rytz, Markus Schrag, Carlo Segginger, Brigitte Woodtli and Debo Wyss as well as the musicians Jakob Hampel and Benjamin Külling.

Depending on the game team, French, English or Spanish can be interwoven in addition to the basic German language.

Dimmable hall light, stage spotlights or lighting that can be switched on and off
(a simple set can be provided by the TAP). From about 80 people: Amplifier system and headsets, depending on the situation on site. 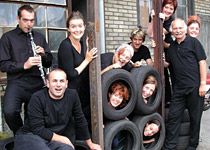 What the audience tells, the Playback Theater Zurich transforms into funny theater scenes in no time. »