Jill's Cocktail Combo stands for authentic American jazz and swing in the nostalgic style of the 20s to 40s.

The band plays mainly classical jazz from the 20s to 40s, and swing from the 30s. The central instrument of the band is the accordion. It gives the formation its special and personal touch.

Jill's Cocktail Combo does not experiment with wild vocal interpretations, but remains true to the nostalgic, authentic style of the time. In this way, she pays tribute to the great American songbook and lyrical composers of the time.

The repertoire consists of songs dating back to the first half of the 20th century (1910-1949). Besides a selection of lesser known songs, the band also plays famous songs (such as Blue Moon, Mack the Knife, etc.), traditional jazz pieces (such as Margie, Sweet Georgia Brown, etc.) and a few popular swing numbers.

The repertoire of Jill's Cocktail Combo includes almost 100 songs. This gives the band the opportunity to adapt to the mood of the occasion. Besides some slow and romantic ballads, they play many dance numbers.

Jill's Cocktail Band was formed in November 2002 when Jill was asked to sing swing dance at the cocktail hour before a New Year's Eve dance. The project was called simply "Jill's Cocktail Band". The name remained and became a permanent fixture in the Swiss music scene. Accordion player Felix Zimmermann, musical director of the band, worked out the arrangements together with Jill. Eddie Davies joined the band a year later, followed by top drummer Phil Franklin. Jill was happy to welcome Bruce Roberts as a new member in 2009, as the band had previously played without a leading instrument.
Jill's Cocktail Band focused on the accordion as the leading instrument, and the band played successfully until October 2013, when the unexpected tragic death of Felix Zimmermann heralded the end of an era.
Finally, in 2014 "Jill's Cocktail Combo" was formed, a predominantly British jazz and swing band. The renowned pianist Alan Rogers, with whom Jill had already sung, joined the band. As an experienced and professional song composer and pianist, Alan brings his own wonderful style to the music, adding new compositions and new sound to the well-known songs of the former "Jill's Cocktail Band". Besides drummer Erwin Griesshaber, Eddie Davies plays the bass. And Jill's husband Ged Fern takes over when Eddie is unavailable. 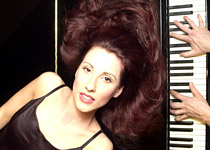 As a duet or as a larger formation, "Voice meets piano" plays jazz standards from the Great American Songbook. » 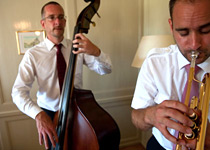 The passionate jazz musicians of Smooth play swing, Latin, pop and dance music for you. »