Proposal The Singing Pinguins - Acapella at ist Best! 3 Pagare Insieme of 6
to the list

Seven strong male voices sing well-known hits from rock to pop to hip-hop, supported only by a tuning fork.

How it all began

One day, seven young men renounced conventionality and started singing together. No instrument accompanies the singers, only a tuning fork, from which the band got its name, provides the right starting tone. Tuningforks has removed all rules, clichés and prejudices to make room for their own musical visions. At the centre of their work is the return to their very own groove, which has always driven people to move, dance and sing.

With hits from the pop, rock, R'n'B and hip-hop genres, the seven men sing their way into the hearts of the audience. For Tuningforks it doesn't matter whether a cover version or an original composition is sung. Only the independence of the interpretation counts - and that is definitely given with this band.

Vocally produced rich beats and hot bass runs set the rhythm, over which the vocals from strong throats harmoniously lie. The result is incredibly powerful, passionate music that leaves no one untouched and is guaranteed to sweep your guests off their seats.


Songs to listen to 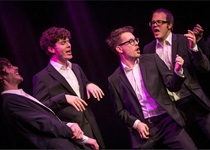 The programme of Pagare Insieme consists of a 40-minute a cappella western in addition to specially composed pieces. »