The programme of Pagare Insieme consists of a 40-minute a cappella western in addition to specially composed pieces.

Pagare Insieme can draw on a varied repertoire of its own. All pieces are written in dialect and cover many genres; from jazz to folklore, from pop to hip-hop and heavy metal. Serious and less serious everyday topics are sung about in a humorous way. The 40-minute a cappella musical "Payday" is part of the fixed programme.

From cover to own creation

A lot has happened since the band was founded 15 years ago. After first attempts with cover versions, Pagare Insieme finally started to write lyrics for songs themselves. The music is composed by the artistic director of the group Peter Zihlmann. Thus a unique style has been created, with which the political and social events of the day are illuminated in a cheerful way.

In recent years the focus of the five singers has been on short musicals ("The Musical", "Pagare saves the world"). Currently, the group has the third singspiel "Payday" from their own pen in their luggage. In it, the performers sing, play and ride through a Helveto western including saloon brawls, rousing honky-tonk music and gripping duels.

Marius (tenor)
As "specialist for new sounds" he was commissioned with the development of sound effects and responsible for the lyrics.

Nik (baritone)
Trained music and movement educator responsible for the choreography and administrative leader of the group.

Peter (baritone)
Artistic director of the group and responsible for the music and arrangements.


Acapella to listen to 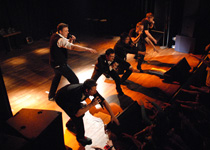 Seven strong male voices sing well-known hits from rock to pop to hip-hop, supported only by a tuning fork. »